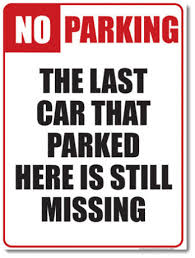 In my neighborhood we have a large email list designed for neighbor to neighbor conversation and requests for help. A frequent request is a phone number for help with city services. The current problem is needing the city to enforce parking regulations when a life may be at risk because a driveway is blocked. The lack of response from city governments reveals structural issues that as in other bureaucracies will be hard to fix.

The person whose driveway is often blocked is referred by 911 to the parking violations department. Parking violations treats it like an expired meter. They ticket when they ticket. No response to a potentially critical issue. They aren’t designed for that. Their only recourse is to place  the complaint  at the bottom of a long list of towing tasks.  Days later when the tow truck shows up, the car is no longer there. The next day another is in its place.

In the moment, the severely asthmatic won’t reach the emergency room without an expensive ambulance ride and the added anxiety of waiting.

A blocked driveway is different from an expired parking meter or a car parked too close to a corner. The existing policy means the workers are bound to fail. Unless they violate the policy.

The lack of response is the result of a structural issue, not a personal or department failure in a specific instance. Since a representative of a council member’s office has now intervened to solve the problem, that is probably how it will appear inside the department. Easier to blame one person or team of people than to address policy.

If the city had an appropriate policy, this would be classified as a life or death risk, not a parking violation. It would receive a response designed to avoid emergencies. With permission, the parking  department might also make recommendations to the homeowner for making the driveway appear to be more obviously active, not like an unused alley. Parking people are on the street every day and know the characteristics of places where cars park illegally as well as legally. I wonder if the street and design department talks to the parking violations department? The Meter Maids?

The need is for a clear definition of the problem and a change in policy and practice. As in most bureaucracies, a policy decision like this can only be made at the top levels by a commissioner or even the city council. A single potentially dangerous parked car, however, in a city of parked cars can’t compete with a failing educational system or a city-wide epidemic. Correcting parking policies isn’t a priority. It can take years to change them.

In a dynamically organized government based on the principles of sociocracy, the structure would allow a policy to be developed and implemented by the responsible department. Within the larger policies governing the city, the people responsible for safe parking would decide how they will accomplish their purpose.

Many governments follow the practice of defining objectives, measuring effects, and evaluating performance. But this is often done at an abstract level. Numbers, often collated with the statistics from other departments, seem unrelated to day-to-day operations. In response to numbers, changes are made by those several levels removed from those governed by them. Instead of corrections in policy and  structural issues, evaluations often result in personnel changes or reorganizations. Morale falls and new problems emerge.

In dynamic governance, the organization would:

In addition to being more effective, correcting structural issues avoids all the unnecessary sturm und drang and time wasted in trying to apply ineffective policies.

Are Policy Decisions at the Level of Parking Enforcement Possible?

I know your first objection will be that the parking meter people and the tow truck drivers are not equipped to make policy decisions. And they are not in charge of their own budget. But I think we need to give it a try because;

When a department’s numbers come out dramatically better in the next review, it will get the budget it needs and be trusted to spend it wisely. But more probably, performance will be so much more effective and their workload brought under control, so more funds will be available within the existing budget.

A related issue is job satisfaction. While some people just want to show up for work and push a broom where they are directed to push it. Others are deeply involved with the issues of green cleaning and more effective service. Organizations, especially governments, often fail to recognize or use this energy.

Categories: Getting it done, In Civic Life, In the Workplace