The primary source of the information in this case study came from a 2021 interview with Byron Shetler, CEO of Hertzler Systems Inc.

Since its inception in the 1980s, Hertzler Systems Inc. has been making tools for data collection and analysis that optimize clients’ performance, production, and profit. Their primary offering is the GainSeeker software, a platform for increased manufacturing intelligence that makes it easy to connect to and act on data. With data and information growing at an exponential rate in our world, their product has increasing value for companies in today’s marketplace.

In the early 2010s, Evan Miller (president) and Byron Shetler (co-leader) researched alternative governance models that could improve their processes while keeping true to the company’s already existing value of equivalence. First, they considered Holacracy, however, the team was concerned the amount of process and formality involved might bog them down. Evan found sociocracy and experimented with its adaptability and more “light-weight” feel relative to Holacracy that would benefit the company greatly. In 2015, a circle structure was drawn up based on the company’s existing structure and sociocracy was adopted as Hertzler’s governance system. 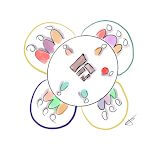 The adoption of a system of shared power with an emphasis on equivalence was not a major culture shock for the Hertzler team. Since its beginnings, the company has worked in a very open and transparent style, valuing input from all, and with relatively little attention paid to hierarchical structure or official titles. Essentially, sociocracy was a more formal and organized system that fits well with how they had been conducting themselves for years.

An implementation circle was one of the first circles, formed with the aim of guiding the process of adopting the new system and also providing support for its continued functioning.

Guided by John Schinnerer from The Sociocracy Consulting Group, the Hertzler team was trained in sociocractic meeting process, consent decision-making, and circle structure dynamics. John encouraged them to adapt the system to meet the needs of their relatively small operation. Very quickly they began to see the advantages of the new system. Groups that would sometimes meet for several weeks with little forward motion were starting to get things done in a more effective and timely manner. Key elements that aided these improvements were the practice of projecting the meeting agendas for all to see, thereby keeping everyone on the same page, and creating clear guidelines for secretaries so that meeting notes were clear and concise.

Hertzler’s commitment to training and strengthening their internal structure deserves special recognition, as it most likely paved their way to long-term success. Besides the careful and intentional work of the implementation circle, which still overlooks the logistics of practicing sociocracy, all employees (including new hires) have gone through formal training funded by the company.

The implementation was not without challenges. One team member was resistant to the new system and would often object to proposals without giving clear reasons. Byron Shetler, the current CEO, also reported that some groups remained informal for too long and should have officially become part of their circle structure earlier for increased effectiveness. Byron has also noted that laxity around some processes, such as occasionally skipping the role selection process if there’s a clear volunteer, has been sometimes tempting to the team, however, the benefits of following a complete sociocratic method is something that they are aware of. 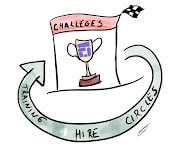 Taking John Schinnerer up on his suggestion to adopt sociocracy to their own needs, Hertzler has been creative in its implementation. At the core of their system are three department circles that, instead of all being double-linked to one general circle, are linked in alternative ways to two separate parent circles to better reflect their already existing and vetted structure.

The three main department circles are their Development (DEV), Customer Service (CSD), and Sales teams. Most of the day-to-day operations at Hertzler happen within these circles and each meets weekly. At one level higher are the Product Management Circle (PDMC) and the Project Management Circle (PJMC). These act as the pair of general circles that represent the two major areas of Hertzler’s activity: The PDMC is concerned with the actual product production of the company while the PJMC is concerned with how the company interfaces with its customers (each meets monthly). Circles count from three to seven members, with most employees serving on multiple circles – four being the median for workers’ circle participation.

One difference between Hertzler’s approach and traditional sociocracy is that two of the three department circles are double-linked to both parent circles. Also, outside of this core, they do not use double-linking, mainly due to their small size. Byron Shetler, the company’s CEO has said that he would love to incorporate more double linking if the company were to grow.

The Hertzler Leadership Team (HLT) is composed of operational leads of Customer Service (CSD), Sales, Development, and Operations circles and is somewhat equivalent to a typical mission circle. It keeps an eye on the overall strategy of the company as well as supporting its healthy functioning (with input from their “Fun” and “Wellness” circles to name two). The “Fun” circle makes sure they have their monthly company BBQ or other social events while the Wellness circle creates incentives for team members to take care of themselves with doctor visits, gym memberships, etc. The Board of Directors, which is linked to the HLT circle, is composed of external stakeholders who meet quarterly and act as a general advisory board.

Linked to the three department circles are several sub-circles (although Hertzler doesn’t use that term) that carry out more specific aims. 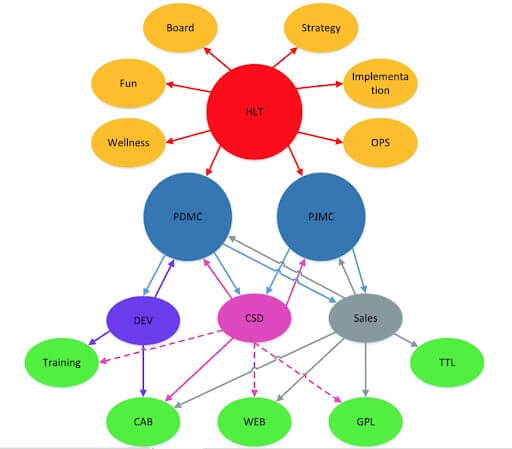 WHAT THEY VALUE MOST

LOOKING TO THE FUTURE

At the time of writing the case study in 2021, there is excited anticipation about the release of a cloud version of Gainseeker which they expect to be revolutionary and will result in expansion and company growth. The expectation is that sociocracy will enable the expansion to happen easily since team meetings in this paradigm are always a manageable/workable size and the efficient effective decision-making processes will allow scalability.

There had been some concern when the CEO who introduced sociocracy left, and the company has continued to flourish using the practices, resulting in trust that it is viable long term. Furthermore, with the role-fluidity that sociocracy offers, there is potential to have the CEO role pass from one person to another. As they are growing in the awareness of what sociocracy can contribute, they are thinking about the HR log book possibly becoming transparent, including disclosing staff salaries, a move towards more social responsibility. 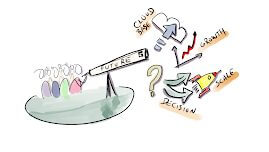 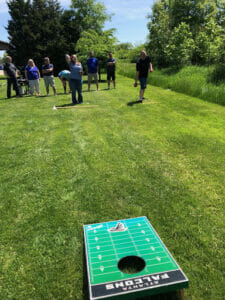 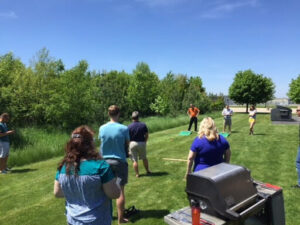 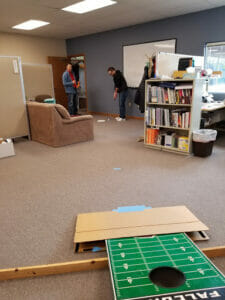 Categories: Businesses, Collaborative Organizations, Getting it done, In the Workplace, Stories

A practical handbook on sociocracy with more than 200 diagrams and examples of sociocratic processes. Spanish and Portuguese translations.

Where to find a copy (including bulk orders)