By the late-nineteenth century it was clear that the democratic ideal on which the United States had been founded was not producing equal representation even for those allowed to vote. Nor was it providing a rational structure for social or economic leadership—at the local or national levels. Workplaces were autocratic, often brutally so.

The government was dominated by politicians who often had their own interests at heart or were ignorant of democratic values. Often only people who were loyal to party bosses were supported by political parties and anyone without that support was unlikely to be elected, or to stay in office.

At best, the democracy that promised citizens the ability to self-determine, to be free and equal, was ruled by the majority of voters only providing a different kind of autocratic domination for the minority. Since only men of European descent and of a certain status were allowed to vote, the flavor of an aristocracy prevailed in effect if not in practice.

And by the late nineteenth century, science was also beginning to lose its luster. The promises of proof and social improvements had not been realized. And leaders realized that science could be used for anti-social purposes as well as for the public good. It often focused on issues that had little to do with humanitarian concerns. 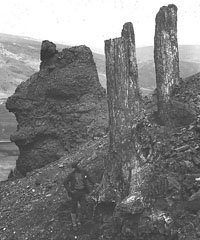 American sociologist Lester Frank Ward was a vocal advocate of a sociocracy. He proposed a plan that was more likely to be implemented than Comte’s governance by scientists and was more vocal in arguing his points. He was highly critical of the government and the kind of person typically supported by the political parties.

In Ward’s sociocratic society, the government would be advised by an academy of scientists rather than the decision-making body as Comte had suggested. Ward advocated using the rugged individual as an ideal. Individuals who “pulled themselves “by their bootstraps.” If the government learned from and functioned as the highest performing individual did, it would be effective and productive. The individual “should be praised and even imitated.”

Ward himself was such a person. He worked as a clerk and attended college at night to earn degrees in botany and law. Eventually he became a paleontologist for the Federal Government. When he retired at age 65, he became a professor at Brown University. In 1903 he was elected the first president of the International  Institute of Sociology and in 1906, the first president of the  American Sociological Society. He published widely. It is in support and in criticism of his proposed sociocracy that the word first entered public consciousness.