The power of using a tree as a symbol of sociocracy is not that it turns the hierarchy on its head, which one can do just as easily with the rake diagram. It’s that the tree  is an almost universally positive  living image  and its biology understood. It is universal symbol of life, growth, beauty, and eternity.

People need dramatic examples to shake them out of apathy, and I can’t do that as Bruce Wayne. As a man I’m flesh and blood. I can be ignored, I can be destroyed. But as a symbol I can be incorruptible, I can be everlasting.

A tree demonstrates the circular hierarchyA round pyramid is the term used by Ricardo Semler in Maver... More created by the principle of consent and does it without triggering negative reactions. Many people believe “hierarchy” implicitly means “autocratic” and “power over” because that is their only experience.  People are in intentional communities and humanistic lifestyle movements, at least in part, to avoid autocratic hierarchies and to find an alternative. References to “higher” and “lower” circles in sociocracy can end the conversation.

Unit, department, division, council, and board could be used to avoid the higher-lower terminology, but they are still attached to autocratic bureaucracies. Roots, trunk, branches, and leaves just as clearly illustrate the functions and relationship between parts and can be used without triggering negative reactions.

Trees better illustrate  foundations of sociocracy in cybernetics, the study of systems that use communications and control to sustain themselves and adapt to their environment. Each part of the tree communicates its needs to every other part. Each controls the condition of the other. No part can ignore any other part and thrive. No leaves, no roots. No leaves, dead trunk. Damaged trunk, dead roots. 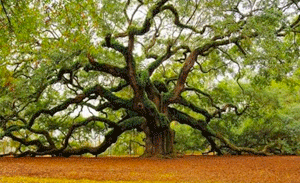 A tree is an illustration of a specific process and a symbol of all processes. It is a semi-autonomous, self-organizing system that is self-correcting and well integrated into its environment. The environment feeds and protects the tree while trees protect and provide for the environment.

The lawnmower spark-plug is a good example of consent that removes it from the realm of personal preference. When the spark-plug is dirty, it “withdraws its consent.” It can’t function. Its range of tolerance has been surpassed.  But as a symbol, it doesn’t work. Who wants to think that in order to object, they have to bring the whole system to a halt. If that were true, very few people would ever object and the purpose of objecting, to improve the proposal, would be defeated.

Few can empathize with a lawnmower or a spark-plug. Creating a diagram that looks like a flower with petals for circles is credited with convincing one community to try sociocracy. It was familiar and welcoming.

There are flowering trees, tall trees, low to the ground trees. Trees that grow on rocks and trees that grow by swamps. There are twisted trees like those in tornado alley that are gnarled and bent sideways but still grow, putting out new leaves every spring. While there are many kinds of trees, each with its own ability to trigger empathic responses, they are still trees.